previous February2023 next
print out 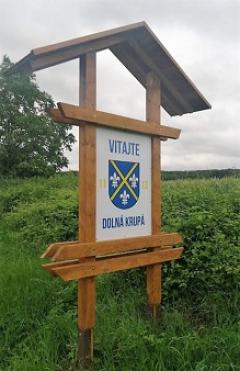 Dolná Krupá is located 10 km from the regional city of Trnava and about an hour from the capital of the Slovak Republic, Bratislava (by freeway). Currently, it has a population of about 2455 residents, which makes it one of the largest villages in the Trnava region.

The local history is inextricably linked with two exceptional traditions, thanks to which the name of our village spreads far beyond the borders of the Trnava region and of Slovakia. They are the Beethoven and rosary traditions, which is the reason why Dolná Krupa is known as a village of music and roses.

Found on the well

Altitude of the village center: 192 m above sea level

Dolná Krupá is located approximately 10 km north of the city of Trnava. Almost the same distance separates the village from the highest peak of the Little Carpathians - Zárub. Main truck roads do not pass through Dolná Krupá. The village belongs to the Trnava district and the Trnava region.

The total area of ​​the cadastre is 2463 hectares. The extra-urban area consists of 1888 ha of arable land, 284 ha of forest land (including the park), 45 ha of gardens, 36 ha of water area, 16 ha of vineyards, 15 ha of orchards and 14 ha of meadows and pastures. The intra-urban area consists of 165 ha. (1ha 10 000m2) The center of the village (parish church) lies at an altitude of 192 m above sea level. m. The highest point in Dolná Krupá’s cadastre is the Šarkan elevation, reaching an altitude of 274 m above sea level. m., the lowest values ​​of altitude are measured at the point where the Krupá stream enters the cadastre area of the neighboring village of Špačince 170 m n. m. The land area of Dolná Krupá is part of the Trnava uplands with rounded ridges, gentle slopes, shallow valleys and wide ridges. Typical lowland hills can be found in the northwestern part of the cadastre, slightly rising to the foot of the Little Carpathians lying about 6 kilometers NW. The village itself is located in the valley of the Krupá stream. In the summer months, especially in August, the water flow is at it’s lowest for many months (except for right after stormy periods) and in the months of February and March when the snow in the Carpathians melts, the flow is usually at it’s highest. The measured flow rate ranges from 0.115 to 0.674 m3 per second.

The stream springs below Cerova hora in the Little Carpathians and after almost 32 km it flows into the Dolná Blava river near Zavar. The village belongs to a slightly humid area, with an average of 50 summer days with a temperature above 25 ° C. It is coldest in January, when the temperature averages only -1.4 ° C. The total annual average temperature is 9.4 ° C. The most precipitation on average is usually recorded in June (rougly 65 mm) and in May (roughly 58 mm). March is on average the driest month.. The annual total precipitation is about 530 mm. Oak-hornbeam forests are especially widespread. Cerium and oak stands are the most represented, followed by pine, agate, maple, elm, linden and near spings or creeks common trees  are ash, hornbeam, alder, willow, hazel. Common shrubs are oats, blackthorn, viburnum, base, hawthorn. Due to the surrounding conditions, extensive forest stands and draws are home to game - especially roe deer, hares and pheasants. The most common animal specias are birds - songbirds are typical: tit, woodpecker, thrushes, goldfinches. Other bird types include partridge, quail, hawks and falcons. In recent decades, a wide variety of waterfowl has nested in the ponds. Common predators are foxes, martens, weasels and polecats. Groups of herbivores, insectivores and pests are represented by squirrels, common European moles, house mice, rats, hamsters and ground squirrels.